IR35: The new challenges and how to handle them – part 1 In this guide from our IR35 expert, Paul Mason, we look at the new challenges self-employed contractors, end clients and fee payers are facing since April 2021’s changes to IR35 in the private sector and how to navigate these.

In part 1 of this IR35 new challenges guide, we will cover:

As you will be aware, IR35 legislation in the private sector has changed and is now aligned with the off-payroll working rules which came into the public sector in April 2017. Indeed, the 2021 private sector changes also update the public sector requirements, in that the legislation has introduced a more transparent IR35 determination process and offers contractors the ability to challenge their status, albeit whether contractors feel the client-led disagreement process actually has teeth is a matter for a later article.

Certainly, the party responsible for IR35 decision-making has changed, but how we determine IR35 status hasn’t changed. It comes back to the 1968 Ready Mixed Concrete case which determined that there are three key issues that make you an employee – the requirement to provide your personal service; the ability of your employer to control you; and the fact that mutuality of obligation exists, i.e. fundamentally there is an expectation that work will be offered and accepted.

An employee is someone who must show up for work and cannot send a substitute, i.e. provide their personal service.

An employee also has somebody above them in the chain who can determine how they do their work, e.g. your boss can say to you ‘I need you here on this day’ or ‘I need you to go and see this client’. Control is less about the ‘where’, the ‘when’ or indeed the ‘what’ of a particular engagement because often those are determined by practical arrangements. You can’t build a house (the ‘what’) in any other place than where the land is and if the site is only open for certain times in the day, when you do the work is also restricted. But the important question is how the work is being done. Who is responsible for the method of the performance of the services?

By contrast, an independent contractor would be responsible for how they do the work.

The third issue – mutuality of obligation - at its base level is an expectation that work will be offered and accepted and as an employee – you have to complete the work that comes your way. If that day ever came where the work ran out, then your employer has either got to still pay you even though there is no work to complete or make you redundant.

If you’re a contractor and it gets to Friday and the work has run out, that’s it. There is no expectation that you’ll come back nor that work will be offered to you.

To demonstrate your independence, you should be controlling how the work is done and you should have that right to send a substitute.

What Ready Mixed Concrete clarified is if all three factors are in place - so you are controlled; there is personal service; and there is mutuality, then we have an employment relationship. If one of those three is missing, then technically it can’t be employment, so it must be a contract for services. In reality, it’s almost impossible to argue just on mutuality of obligations alone as it is probably the most nebulous of the three. Ideally you want to be able to demonstrate that you’re not being controlled or that you have a genuine right of substitution, and preferably both.

Whilst a tribunal judge will always consider all the factors to paint a picture of the whole engagement, it is when based on those three key factors you can’t determine whether it’s an employment relationship or a contract for services, that you consider the secondary factors of financial risk and in-business factors.

Examples of financial risk include raising invoices, invoicing which can be challenged, delayed or just not paid; or you may be obliged to rectify defected work at you own cost and of course engagements can come to an abrupt end.

Business enterprise can be evidenced by having business insurances such as professional indemnity cover, marketing your business, having your own website and undertaking your own training etc. All things you might expect of someone being self-employed, but these secondary factors, despite what was said in the Kaye Adams case, are rarely going to see you home and dry. They may be the deciding factors if the status of the engagement cannot be determined on the basis of control, personal service and mutuality of obligations.

The issues have not changed 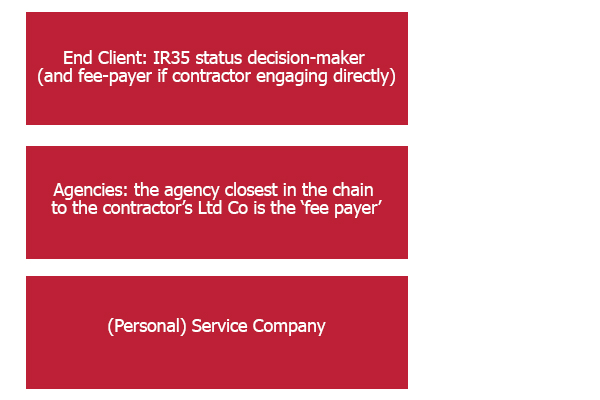 An example of a contractual chain.

To summarise, the post April 6th 2021 off-payroll working rules still require the IR35 status of an engagement to be determined in the same way. What has changed is who has to make the decision. In perhaps 90% or more of all engagements, it is the end client which has to make the decision. They are responsible for determining whether IR35 should apply or not, or more correctly put, whether the off-payroll rules apply to that particular engagement.

If an end client engages with a limited company contractor directly, then they’re not just the decision-maker, but they will also be the fee payer. In many contractual chains, there is an agency, or possibly more than one agency, sat in between the end client and the contractor. The agency closest to your company is the fee payer. They are responsible for acting upon the decision that’s been passed down on to them and paying your company accordingly.

At the bottom of the chain on the image above, you have the contractor’s limited company, often referred to as a personal service company or PSC. The term doesn’t have a legal definition, but it is widely used for an independent contractor operating through their own limited company.

Who is the decision-making end client?

We know that the end client makes the status decision, but who is the decision-making end client? That may not necessarily be so straightforward. Essentially, you have two issues here:

Are we filling a role (sometimes rather unkindly referred to as “bodyshopping”)? So, is the end client saying to you or to the agency ‘I want a Project Manager’, or are we talking about a contracted-out service. For example, could it be an NHS Trust that’s saying, ‘we want to build an extension to the hospital’ and award a contract to ABC Construction to make that happen. ABC Construction will decide how the project is effectively resourced and that’s the distinction. ABC will determine who is engaged and will be the end client for the purposes of the legislation.

We are seeing more and more contracted-out services where effectively the end client – the ultimate end client on whose site the services might actually be provided by the contractor’s company – has outsourced the whole project. This means they have said to a third party: ‘These are the deliverables, this is when it needs doing and this is what we’ll pay for it’. How you achieve that we will leave entirely up to you’. Where that is the reality, then going back to the NHS Trust as an example, the trust doesn’t have to worry about IR35, the construction company has that responsibility if it engages contractors trading through their limited company.

However, contracted-out or outsourced services must represent the award of a genuine project - just labelling an engagement as a statement of works or work package is not going to be enough. HMRC are very clear on this point – see HMRC’s Employment Status Manual ESM10010 for more guidance.

Small companies have an exemption from the legislation and according to HMRC, this removes some 1.5 million entities from the requirement to determine status. This adds a further complication to determining who has the IR35 responsibility. Some small companies do occasionally engage contractors, particularly when it comes to the outsourcing of consultancy projects (prevalent in both the public and private sectors) where quite often the contracts are awarded to smaller consultancies. This then means we may have to consider the small company exemption. A small company is one that based on s382 of the Companies Act 2006, can tick two of these three boxes:

The small company exemption has the effect of pushing the IR35 decision-making and liability down on to the contractor. This scenario is the same “chapter 8” (Part 2 ITEPA2003) rules (“old IR35”) that have been in existence since April 2000. When it’s an end client making the IR35 decision, it’s known as being under “chapter 10”.

HMRC cover more on this in their Employment Status Manual ESM10006.

In a similar vein to engagements with small companies, we now come on to the issue of engagements with overseas clients. If the overseas client has no UK presence at all, then the responsibility for IR35 becomes your company’s. If the overseas entity has any UK presence, then the UK element of that business will have to undertake the IR35 decision-making. Even if that UK presence is a small company, because you have to consider the size of the whole group. If you are working with overseas clients you will not be issued with an SDS, but if you are ever challenged by HMRC you will have to ensure that you can demonstrate you took reasonable care in making your IR35 decision. If you don’t, HMRC will not only recover the lost tax and NICs (with interest), but they will also seek to levy a penalty. Our advice is that you seek an independent review of your engagement.

How are end clients reacting to the IR35 changes?

Some have already done so in preparation for the initial implementation of the private sector changes scheduled for April 2020. Many end clients – particularly in the financial services sector – decided to avoid engaging with the legislation by making an effective ban on the engagement of PSCs.

The recent revelations about HMRC fining the DWP, Home Office and others in the public sector has also reinforced conservatism which exists generally in the supply chain. This together with the business uncertainty around Brexit and Covid has also reduced the number of contractor opportunities. There is also evidence of businesses having also reviewed their use of contractors generally.

What is becoming clear, is that there has been complacency among end clients with many seemingly having viewed the 6th April 2021 as the point to start considering the new rules and not to have their processes in place. This may have been brought about in part by HMRC having stated that there would be a ‘light touch’ compliance regime in the first 12 months. Perhaps end clients thought that not only would there be no penalties, but HMRC wouldn’t seek to recover any tax (and interest due).

They will find out to their cost that this won’t be the case. We are also watching to see how light touch HMRC’s compliance activity will be as in September of this year, it began in earnest in the oil and gas sector.

On a more positive note, it has dawned upon some end clients that a blanket ban on contractors being engaged through their own companies may lead to a loss of the best talent and resources. As we say when legislation was introduced to combat false self-employment in 2014, the initial refusal to engage the self-employed soon turned as end clients realised that there wouldn’t be an issue if you engaged properly with the legislation.

It may take time, but genuine contractors can expect the same sea change from end clients in respect of this legislation. It has been a tough time for contractors, but it doesn’t spell the end of contracting though your limited company!