IR35: The new challenges and how to handle them – part 2

In this guide from our IR35 expert, Paul Mason, we look at the new challenges self-employed contractors, end clients and fee payers are facing since the April 2021 changes to IR35 in the private sector, and how to navigate them.

The starting point of the off-payroll working (IR35) legislation is the obligation of medium and large-sized entities to make an IR35 status decision for each and every contractor they engage through a limited company (PSC).

HMRC offers guidance in its Employment Status Manual on what constitutes a correct SDS at ESM10013 and ESM10014 references the importance of end clients taking reasonable care in the decision making process.

It is so important that end clients take reasonable care and communicate that decision to the contractor (and the agency below the end client should there be one in the contractual chain).  In order to achieve that, the SDS must take into account both the contractual terms AND the working practices.

An end client cannot just make blanket decisions, and based on the public sector experience of the off-payroll working from April 2017 onwards, HMRC recognised the need for greater transparency in the IR35 decision-making process which led to the requirement to create and issue an SDS.

As referred to in ESM10014, the penalty for not taking reasonable care is to have the fee payer liability conferred upon the end client, so it is surprising to hear that six months after the legislation changed that there are still engagements out there where there have been no status determination statements issued and those end clients really need to start doing this.

The other thing that an end client needs to do is to ensure that they have a ‘client-led disagreement process’. What that means is that if you as the contractor disagree with the SDS, the end client must respond in writing within 45 days either to overturn their decision or to confirm why they took the decision, to ensure there is a process in place for transparency.

Again, an end client failing to do this will become liable for the tax due. Nevertheless, it is likely that the need for this process will diminish as time goes on. This is because new engagements are likely to be advertised as inside or outside IR35. Therefore, the chances of a contractor applying for a role knowing that is inside and then challenging it will be small – if you want an outside engagement, you will simply look elsewhere. 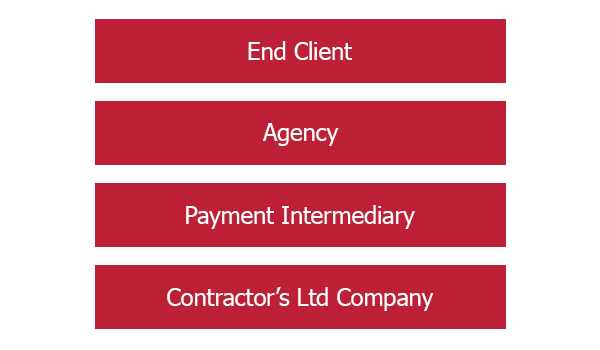 An example of a typical contractual chain.

Something to also be aware of are the transfer of debt provisions. An example of this would be if an end client had determined an engagement to be outside IR35 and correctly passed the status determination statement down to the contractor and also down to an agency. However, there is a further payment intermediary inserted into the contractual chain to take on the role of fee payer.

HMRC are concerned that at the point that the tax has to be paid, suddenly that Payment Intermediary has disappeared or even where the agency closest to the PSC goes under and cannot pay the tax.

However, if HMRC are unable to collect from that agency, they will go to the end client. This means that end clients who think they’ve done everything properly still could find themselves in trouble if the contractual chain falls apart because the fee payer can’t afford to pay the additional tax and national insurance.

How prepared are end clients?

Unfortunately, there are some end clients who have not made the necessary preparations. Some businesses seem to be of the mindset that because HMRC are having a ‘light touch approach’ to the new rules, that the 6th of April this year was the point to start getting ready. No, the 6th April was the point to be ready.

We know from what happened in early 2020 in finance and banking that a lot of businesses took their decision about how they would approach the new rules – in many cases not to engage contractors through limited companies in advance of the original April 2020 implementation date – and then stuck to them. This avoided the issue altogether, leaving contractors with options that all involved paying PAYE – umbrella company employee, agency employee, taking a fixed term employment contract or going on to be staff of the end client.

End clients need to be aware that it isn’t just the working practices which need to be assessed; which means that you can’t just use an assessment tool – whether that is CEST or any other assessment platform – to get the answer on the IR35 status of an engagement. Contracts have to reflect an outside IR35 engagement and that includes schedules, statements of works, but also means reviewing whether there are any end client policies which might negatively impact upon your ability to undertake the services as you see fit. HMRC are always going to start their enquiry with the contracts because they set the framework for the engagement, as indeed will a tax tribunal.

Clearly the working practices have got to support the contractual framework, but an assessment tool won’t interpret the contractual terms. For example, you might answer that your engagement includes a right to substitute, but actually that right turns out to be too fettered (restricted); or you may believe that you determine how the work is being undertaken, but the contract only offers “reasonable autonomy”.

If the end client has certain policies around things like health and safety or perhaps the use of IT but those policies actually impact on how the contractor does their work, that could have a negative impact on IR35. It’s really important that everything is considered and just relying on a working practices assessment platform won’t do that.

In many instances there is a genuine need for end clients to change their behaviour. Some end clients might acknowledge that contracts need to change, but still believe it’s ok, for example, to invite a contactor to the Christmas party or to the golf day or to provide them with discounts in the client’s canteen or social club. But that’s what you do for employees, not your suppliers. The working practices must reflect the contractual terms.

This change in mindset is perhaps even more important if the relationship is being deemed to be a genuinely outsourced arrangement. Where the outsourcer has responsibility for the project/service, the ultimate end client cannot be interviewing contractors which have been sent by the outsourced provider. The end client cannot influence how the contractors do their work. If the end client has a problem with the service provided, their first port of call is the outsourced provider to deal with the  issue, not the individual contractor. That is really key: it’s not just about the paperwork, again it’s about behaviour as well.

The problem with CEST

The other issue is that there’s an overreliance placed on CEST – the check of employment status for tax tool. Firstly, it’s a tool that already has mutuality of obligations built into it because HMRC’s view seems to be that there is a contract so therefore there must be mutuality – but that’s not what case law says.

Secondly, like any assessment tool it can be manipulated and if you are answering the questions to suit the desired outcome rather than reflecting what is actually happening on the ground, the determination it produces is going to be of no use to you whatsoever.

Thirdly, from HMRC’s own CEST usage data, the tool only produces a clear determination on around 80% of the occasions it is used, and yet end clients are required to do so 100% of the time. Finally, HMRC have said that they will accept the CEST outcome unless a compliance visit says otherwise. On that basis, can you ever place reliance on CEST?

To summarise, end clients relying on CEST who don’t have a detailed understanding of the IR35 decision-making process could find themselves in hot water. Just ask NHS Digital; or the DWP; or the Home Office. All examples of end clients whose over-reliance on CEST has led to unhappy outcomes.

The responsibility of the feepayer – based on the determination handed down from the end client where they are not one and the same – is making the correct tax and NIC deductions and that could include the apprenticeship levy as well.

If HMRC start an enquiry into an end client (as we always thought they would do and borne out by activity in the oil & gas sector in the Autumn of 2021) and they are satisfied that the end client has taken reasonable care, the next question will be “Who paid this contractor?’ If the answer is that it was ABC Recruitment, then that is where HMRC will seek to recover any unpaid tax, interest and possibly even a penalty.

From an agency’s perspective, where they are the fee payer, they are very much in the firing line which is why a considerable number of agencies are interested in having some form of insurance. However, they can only do so if due diligence has been undertaken on the whole of the supply chain to reflect genuine outside IR35 engagements.

Nevertheless, the issue for some agencies is much more fundamental because they are caught by end client inaction. If end clients aren’t making status decisions, how can an agency really know whether they’re doing the right thing by paying people gross or whether they should be deducting tax and national insurance?

Finally, more and more agencies are seeking to operate outsourcing models on the basis that they are supplying a 3rd party managed service and not providing personnel to fill roles. However, we have already seen one or two examples where it’s “outsourcing” in name only.

“Whether a contract is for a fully contracted out service is a question of fact, based upon the commercial reality of the arrangements. Care should be taken to ensure that a labour supply contract has not simply been re-labelled as a managed service. For example, labelling a contract as a contracted out service or a ‘statement of work’ when in reality the contract contains a provision for labour will not prevent the off-payroll working rules from applying, and the reality of the arrangements should be considered.”

Where it is genuine outsourcing, that agency has to take on a project and be financially liable for the service – whether it makes a profit or loss – as well as being responsible for any issues that come out of that project. Just issuing a statement of works is not going to be enough.