Alice Pulford, founder and volunteer for the LoveSupportUnite Foundation from Rothley in Leicestershire, has been announced as the winner of Britain's Best Volunteer award.

Alice faced stiff competition from hundreds of nominations for volunteers across Britain, and was put through to the final alongside four other remarkable charity workers by award judges John Barrett, Acting CEO of Small Charities Coalition, Andy Partington, Director of Markel UK and Pauline Broomhead, CEO of The FSI, a charity focused on arming small charities with the best learning opportunities and providing a platform on which to influence policy and decision makers.

Alice was the winner in a close result which saw the public cast a total of 3,000 votes for the five finalists. With Alice currently volunteering in Malawi, Andy Partington and John Barrett presented LoveSupportUnite volunteers Sophie Riley, Ibzie Duckett, Scarlett Duckett and Alex Duckett with a cheque for £1,250 for the charity at Alice's former school, Ratcliffe College in Leicestershire. Alice will also receive £1,000 in holiday vouchers for her own personal use. 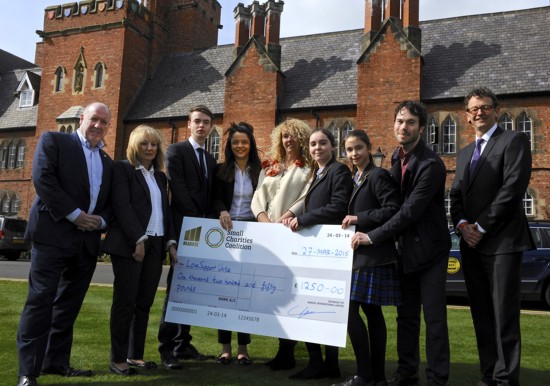 Alice began volunteering in 2008, aged 17, during a year out in Malawi. After teaching at a primary school for five months, she began work on building a shelter which soon grew into the Tilinanu orphanage, housing 20 girls.Alice returned to the UK to begin her university studies and spent her spare time during the year fundraising to expand the orphanage. The following summer, she returned to Malawi and used the funds to double the size of the shelter and move in 36 children – giving many their first opportunity to attend school.

In 2014, Alice and her sister Nina founded the LoveSupportUnite Foundation and continued fundraising for a school to be built and for a 'porridge fund' to help feed the children. The charity now sends £1,500 each month to the orphanage.

More recently, she's been in discussion with the Malawian government in relation to a proposal which will set the standard of education expected from schools across Malawi, as well as the standard that orphanages in Malawi must aim to adhere to.

On finding out she had won the Britain's Best Volunteer award, Alice said: "My sister Nina, and I, believe that to make positive and lasting change you need to take the time to work and listen to communities and build development together. The work that we are doing is not easy – and there is no quick fix. We are continuously working to generate change, and to build our support network.

"We are so shocked but grateful for the acknowledgement and love that has been shown for our efforts with this award. The endless love and support from our family, friends, community, local schools and, of course, our wonderful volunteers has enabled us to contribute positive change within the lives of so many hundreds of children, adults and communities in Malawi. Our dedication to this cause is lifelong. We want to share the opportunities that we have been lucky enough to receive in our life to help others less fortunate. Our motto is: we are love, we are grass roots, we believe in positive sustainable change."

Alice added that the £1,250 donation will be put towards making the school standards project sustainable, and to introduce nutritional support through education of drip irrigation techniques.

The four runner up finalists, who each receive £250 for a charity of their choice and a personal prize of an iPad mini, are:

'Alice's determination over the last seven years to support Tilinanu Orphanage has had a huge impact on the children living there, and her current work with the government to improve standards across schools and orphanages across Malawi will benefit many more in the future.'

Andy Partington, Director of Markel UK added: 'Alice has faced stiff competition from the hundreds of nominees made in this year's award, all of whom make an invaluable contribution to communities locally or further afield. We're delighted that the award has enabled so many small charities to celebrate the achievements of their volunteers.'

To find out more about the volunteering achievements of Alice and the runner up finalists, visit https://www.markeluk.com/britains-best-volunteer/finalists