The Rise of the Self-Employed - our survey's findings In an age of hot-desking, freelancing and contracting, we wanted to explore the differences between the lifestyles of the self-employed and those traditionally employed.

We surveyed 250 self-employed professionals in order to compare and contrast the two working lifestyles. 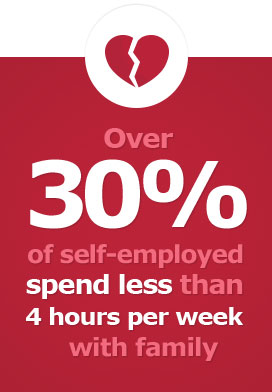 Being self-employed gives the freedom to dictate your own working hours – deadline and client needs dependent. However, our findings show some surprising results in how the self-employed interact with their friends and family, as well as the holiday time they take. Over a third (38%) of those surveyed spend under four hours with their family each week – the equivalent of less than 34 minutes a day – which could be just a quick meal a day to catch-up with their loved ones. One in five don’t see any friends on a weekly basis, with 16% spending under an hour socialising per week. 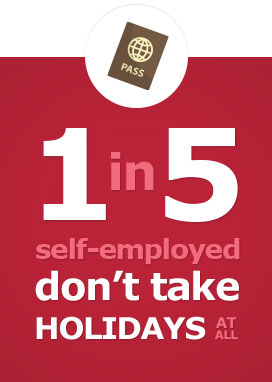 Despite the freedom to head out of the workplace at their own discretion, self-employed workers’ commitment to work is still as present as the traditional workplace. Perhaps the most surprising discovery from the people we surveyed was that one in five self-employed don’t take any holidays at all. Naturally, there are no set holiday days when you’re working for yourself – an element of many that allows much more freedom than the regular workplace. However, the pressures to keep clients happy and maintain relationships to avoid them going elsewhere means extra stress. Perfect project delivery is of such concern that one individual surveyed was even scared to take holidays in case their clients go elsewhere. 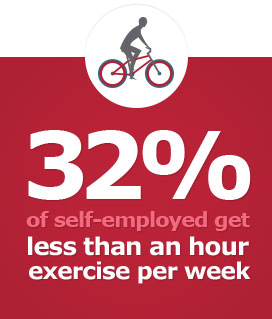 A regular workplace environment dictates a structured work schedule, which is generally 35 hours or more per week for the full-time employed. Since 2015, there has been a 15% increase in full-time employees working more than 48 hours a week, going beyond their contracted working requirements. From the self-employed we surveyed, working hours were still consistent, with the majority (33%) working between 30 and 39 hours per week. Only one in five self-employed workers committed to 20 hours or less per working week, while 10% worked over 50 hours per week.

Findings from a recent survey by the Chartered Institute of Personnel and Development (CIPD) revealed that 41% of the regular workforce are satisfied with their pay; this compares to 35% of self-employed workers, who cite their main worry as uncertain income. Being your own boss means having to source your own work and regularly chase invoices and late payments, all contributing to concerns of an inconsistent workload and therefore an unpredictable income.

Further to this, 29% of traditional employment workplaces offer a cash-bonus environment (with 75% of those eligible receiving a bonus). The bonus incentive is, for the most part, completely unattainable for the self-employed – or is certainly less predictable since it comes at their client’s discretion. 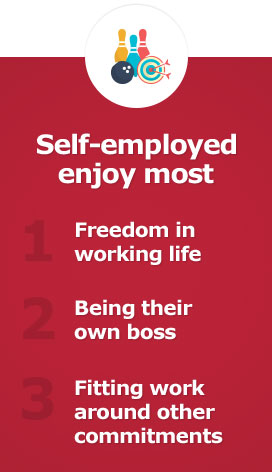 Overall, 90% of self-employed workers are happier in their new careers than when in traditional employment, with freedom and flexibility being the key factor as to what they enjoy most (63% cited freedom/flexibility as the main enjoyment factor). Compare this with job satisfaction in a traditional working environment - particularly that of the public sector – decreasing by the year as found in a recent CIPD survey. Reasons behind this drop in satisfaction rates aren’t published, but this follows the same trend of traditionally employed workers’ declining attitude towards their senior management year on year. Again, this is something completely avoidable with self-employment, with 15% of this group enjoying not having a boss or having to answer to someone senior the most.

Several factors come into play for day-to-day satisfaction in self-employed life – most notably freedom, being your own boss and being able to fit work around other commitments. Just under 40% of self-employed workers, a significant proportion of those surveyed, said they didn’t miss anything at all from the typical working environment.

What does this mean for freelance Britain?

Comparing the lifestyles and job satisfaction of the self-employed and traditional employees raises the question of which is the most desired. With the number of people taking on freelance work increasing from 1.4m to 1.9m since 2008, and the attractiveness of an on-demand workforce appealing greatly to businesses of all sizes, we expect to see an increasing number of those employed in traditional roles moving to self-employment in the coming years.

Take a look at our Rise of the Self-Employed survey infographic for a snapshot of the key findings.