For contractors, understanding IR35 and working out if you fall inside or outside of IR35 can be difficult.

The legislation is not simple and gaining the level of knowledge you need to really understand IR35 when you're a busy self-employed contractor, can be hard.

In this Contractor’s Guide to IR35, we’ll help you to understand what IR35 is, how it will affect you and what you need to do.

We’ll also explain more on the April 2021 private sector reform and what you can expect from a HMRC investigation.

Towards the end of the 1990’s, the UK saw a substantial increase in flexible working.

This meant that end clients could gain extra resource as and when required, from workers who did not need to be managed or paid employment benefits.

For these businesses, it meant that a considerable saving was made, as Employers' National Insurance was not owed on the fees being charged.

The flexible working arrangements also benefitted contractors. To make up for the lack of employment benefits, contractors often charged higher fees which in many cases meant earning more than they would have as salaried employees.

As well as this, contractors paid lower taxes. They could benefit from reduced PAYE, by paying themselves a low salary and taking the rest of their payments through dividends. Unlike employees, they were also able to claim business expenses, like travel and subsistence costs.

Despite this set up suiting both end clients and contractors, the Government believed these working relationships were ‘disguised employment’. This is when HMRC believe that contractors engaged by end clients through their own limited company should in fact have been employees taxed through PAYE.

This sparked the introduction of the Intermediaries Legislation, also known as ‘IR35’, in April 2000.

The Government introduced IR35 to offset perceived tax avoidance by the use of contractors hired through their limited companies, often described as personal service companies (PSCs).

The engagement of a contractor, via a series of limited companies from end client down, sometimes through a recruitment agency, made it hard for HMRC to challenge cases of disguised employment.

The introduction of the Intermediaries Legislation, also referred to as IR35, in April 2000, was brought in to tackle this problem. The name itself, ‘IR35’, came from a press release - Inland Revenue 35.

Since coming into effect, the tax legislation has impacted hundreds of thousands of contractors, causing a raft of worry and frustration. End client engagers have also been hit hard, with 20,000 recruitment agencies since having to make changes to their business practices.

Over the last 20 years, the legislation hasn’t been a success for either HMRC or the taxpayers affected by it. We’ve seen countless HMRC consultations, parliamentary hearings and changes in HMRC’s approach, as well as thousands of IR35 enquiries, tax cases and appeals.

Initially, responsibility to ensure IR35 compliance was put on the PSC, rather than the end client. While this has since changed in the public sector, it remains the same in the private sector.

Until April 6th 2021, it is the responsibility of contractors to determine whether the relationship is genuinely self-employment or disguised employment. 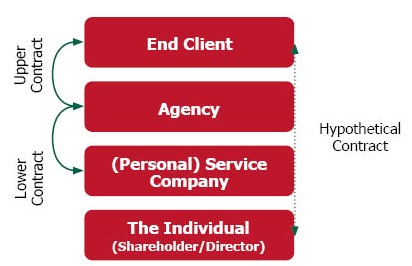 HMRC recognises that there is no direct contractual relationship between the contractor and the client. With IR35, they seek to establish the hypothetical contract that would be present if the contractor were engaged by the client directly, without the limited company or an agency.

If the hypothetical contract is believed to create a ‘contract for services’ (self-employment), the engagement is considered to be outside IR35 (not caught by IR35).

Contractors believed to be working outside IR35 are permitted to receive dividend payments and claim business expenses, which results in a much lower tax burden than that of salaried employees.

If the engagement is thought to be inside IR35, the tax position in the private sector, until April 5th 2021, was that all, apart from 5%, of the fees earned on that engagement will be handled as PAYE. The excluded 5% is left to cover the running costs of the PSC.

Being found inside IR35 means that business expenses like travel and subsistence costs cannot be claimed, apart from in certain cases where they could also be claimed for by an employee.

Generally, a contractor will be financially worse off if an engagement is found to be insider IR35, instead of outside of IR35.

Read part 2 of a contractor's guide to IR35 here.